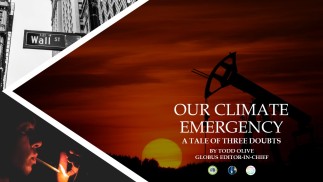 PROJECT: Climate Emergency is a campaign organised by staff and students from Warwick University who want the university to declare a state of climate emergency and commit to being carbon neutral by 2030.

PROJECT: Climate Emergency was originated by Todd Olive, student of Economics & Sustainability and Editor-in-Chief of online magazine GLOBUS at the University of Warwick and by Dr. Alastair Smith, Senior Teaching Fellow of the Global Sustainable Development Division at the same university.

They are currently organising a petition for Warwick University students and staff to sign requesting the university to declare a climate emergency and set a target of carbon neutrality by 2030. More details here.

In November 2018, Bristol City Council passed a motion declaring a state of Climate Emergency, and consequently committing the city to achieving net carbon neutrality – i.e. net carbon emissions of zero – by 2030 (Wilson, 2018): in light of the University’s stated to commitment to “transform our region, country and world for the collective good” (University of Warwick, 2018), we believe that the university, as an institution and a community, should be doing the same.

But how can we make this happen?

The answer is simple; and, I hope, is obvious from the discussions made in this series. As a community body, we must act together, now, to implement wide-ranging, systemic change in the way that we live our lives: we must come together to commit our community to achieving these goals.

As such, alongside the Warwick Chapter of the Climate Reality Corps, and the Warwick Global Sustainable Development Society, we are proud to announce ‘PROJECT: Climate Emergency’: an opportunity to make this happen. We are calling on the university to declare its own state of Climate Emergency, and to follow in the footsteps of Bristol city by committing to an entirely carbon neutral state by 2030.

By joining together under one banner, we hope to work with the entire community to make a difference, to be the change that we so clearly need to see – and we would like to invite every single individual and group of individuals on campus to join us in our mission. Calling on our university to take a leadership role in community-level climate action is a powerful yet accessible way to contribute to systemic change: as students, we have a huge stake in the running of our campus, and as the university’s primary clients, our voice is incredibly powerful in determining its strategic direction.

My view is that while there have been important achievements, the latest IPCC report of Oct 2018 outlines a significantly and structurally more serious situation than any policy and practice – from Uk National Government down – has previously considered.

Therefore, I believe that communities across the UK need to be turning to the leadership demonstrated by the University and City of Bristol, as well as others, and now including school children, in declaring a stage of climate emergency and committing to net zero emissions by 2030. The simple reality is that anything less, is simply not sufficient.

This is something recognised by a student coalition at the University of Warwick, who are petitioning for a climate emergency recognition and that the university commit to the above timeframe for emission reductions.

If anyone has any interest in connecting with these agendas, I’d certainly be pleased to make connections. I think Coventry Council have the chance to play an historical and strategic role here.

Write to Dr Smith at A.Smith.21@warwick.ac.uk

This site uses Akismet to reduce spam. Learn how your comment data is processed.